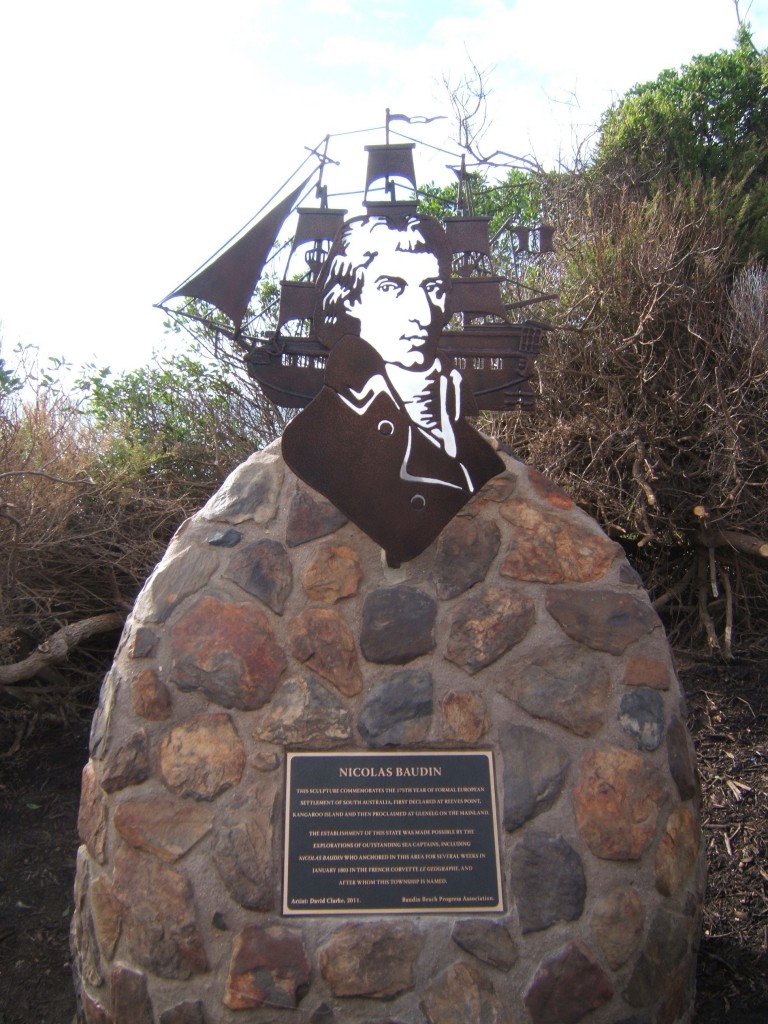 On the 15th of July 2012, there was a most moving ceremony at Baudin Beach, in the course of which was unveiled a plaque and statue celebrating Nicolas Baudin [1754-1803], the dedicated and modest explorer-naturalist who first circumnavigated Kangaroo Island in early 1803.

The President of the Baudin Beach Progress Association, Des Lanthois, who can only be commended for his persistence with the project and high sense of patience and diplomacy in running the Association, read an introductory note. Then, as the member on Kangaroo Island of the Association of the Friends of Nicolas Baudin, I read on behalf of its President, Martine Marin (who has visited twice the island in the past), a text commenting on the historical and personal context of the event.

When the plaque and statue was unveiled, the simple and deep beauty of the opus was stirring. Baudin Beach artist Dave Clarke, already known for his two beautiful statues of pelicans in American River, has again completed a splendid creation — art in the service of education as rarely seen.

All photos by G. Bittar 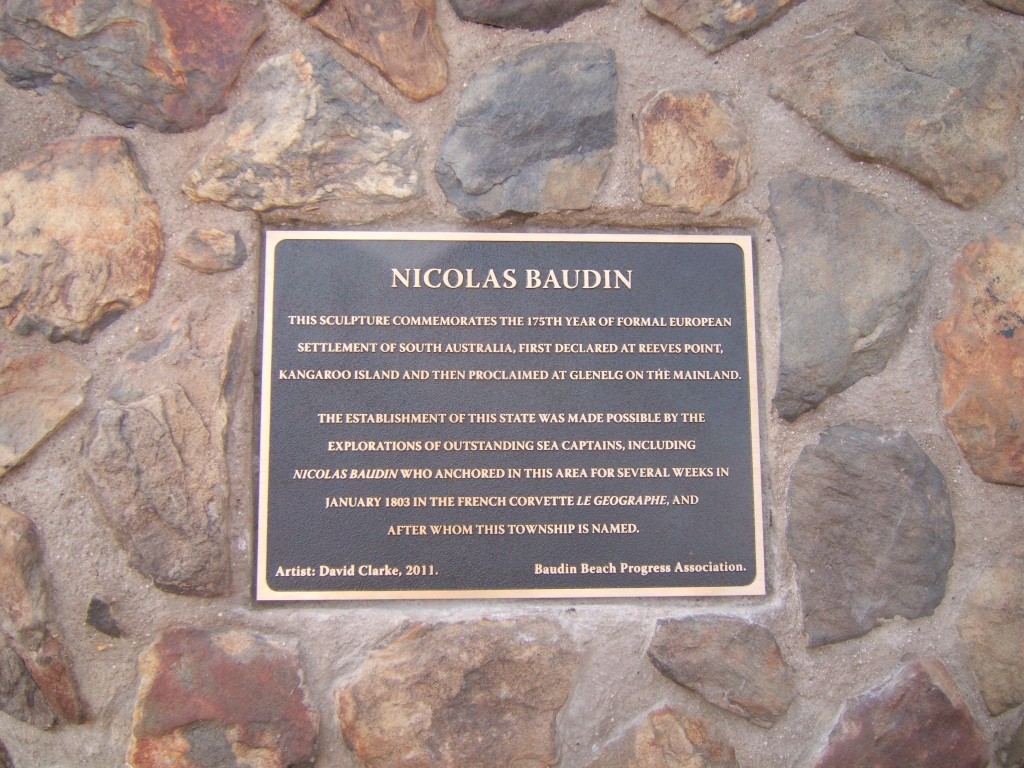 Letter By Martine Marin, slightly edited by G. Bittar, who read it on her behalf on 2012.07.15 for the unveiling of Nicolas Baudin’s statue and commemorating plaque at Baudin Beach:

I am awfully sorry not to be part of the event Sunday this 15th for the unveiling of this beautiful work of art dedicated to Nicolas Baudin and his expedition who first circumnavigated the island back in 1803. But I will be there “through the heart” as we say in French and I am very proud of what is being done on Kangaroo Island to commemorate the expedition, particularly in Penneshaw and in Baudin Beach.

Of all the places I have been to, following the tracks of the Baudin expedition, Kangaroo Island has always been the dearest one. Arriving by ferry to Penneshaw, the “igloo” as I called it could not miss all the people arriving there, a monument as a vibrant homage to Nicolas Baudin, who almost 210 years ago set foot on the island and was the first to circumnavigate it. From North to South, all the names in the island coast are a testimony to the expedition. As a volunteer in the National Parks back in 1993-94, I will never forget all those names that were a strong incentive for me to discover the ins and outs of the expedition later on: Cap du Couëdic, Baie Gantheaume, Cap Borda, Baie Vivonne, and also the Ravine des Casoars to be reached after more than one hour of walk…

Today on the island, there is a Baudin-Flinders Center and it is easy to keep in mind the memory of such a fine captain: even restaurants and shops bear the name of Baudin. I am very proud of your association, the Baudin Beach Progress Association, to have named their township Baudin Beach (in place of American Beach), and to unveil on July 15th such a beautiful artwork by David Clarke commemorating the Baudin expedition and its captain, on the occasion of the 175th anniversary of the nominal European settlement in South Australia. I have visited many areas in Australia but South Australia and Kangaroo Island made me feel really at home for the atmosphere and probably the spirit that dominates here with a very strong friendship and links between people and the land. No wonder it’s the encounter between Flinders and Baudin that led Baudin to circumnavigate the island but also to put the final lines to the mapping of Australia, just a few waves away from KI’s shore.

Considering the dedication of Baudin to natural history, it is proper that two bird species bear his name: Calyptorhynchus baudinii, the white-tailed black cockatoo, and the famous Baudin’s emu, 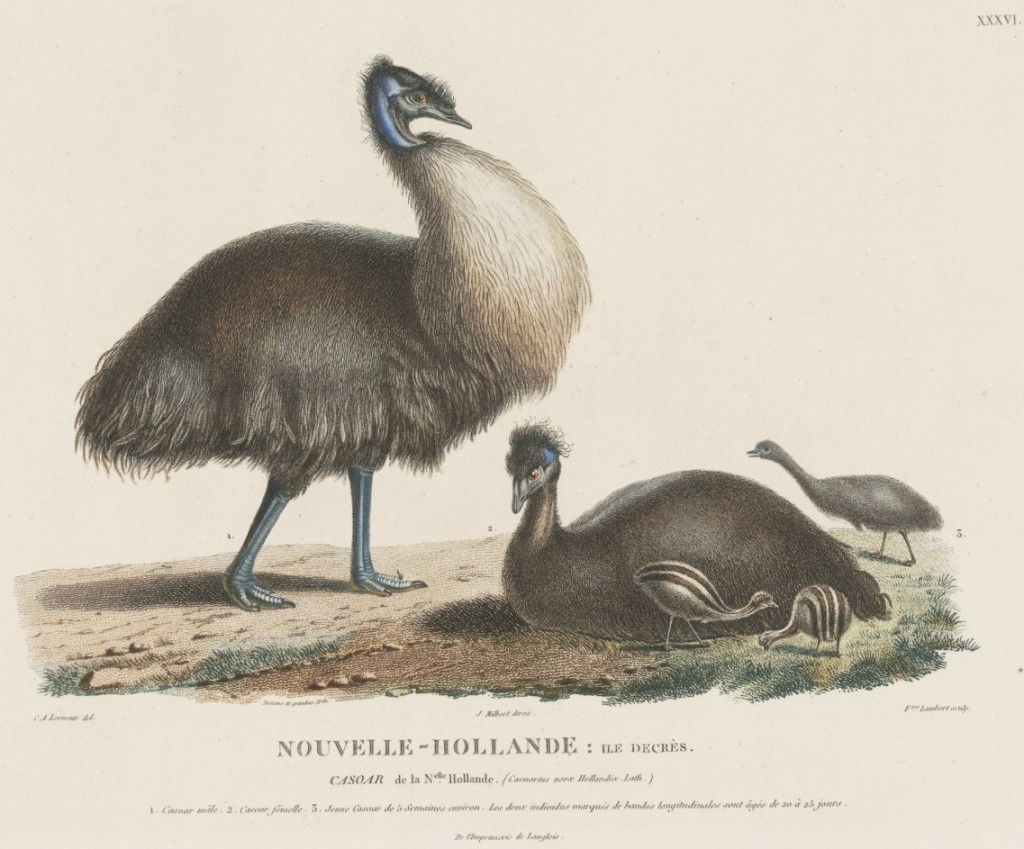 the Kangaroo Island dwarf emu, Dromaius baudinianus, now extinct and of which only remains can be found: a skeleton and a stuffed individual at the French national museum of Natural History in Paris, and also a skin part at the Muséum d’Histoire Naturelle in Geneva (these exceptional biological samples are to the merit of Baudin’s expedition, which brought some back alive to France).

Baudin recalls vividly the food they could find in abundance during his stay on Kangaroo Island: oysters, pelican’s eggs and kangaroo were on the menu during their January 1803 circumnavigation, a real blessing for mariners longing for a change from their everyday fish menu they had had so far on board.

Today, looking at the wallabies and the kangaroos that are grazing peacefully in the park of the Museum of Natural History in Paris, I am wondering if their ancestors were some of the 19 kangaroos taken aboard the Géographe when the expedition left Kangaroo Island…

The homage rendered to Mary Beckwith in Baudin Beach is really unique. There is no other place commemorating the first white woman setting foot and circumnavigating Kangaroo Island. Who she was, where she came from, where she ended up. There is a whole mystery there but her presence in Baudin Beach is essential to foster imagination. One of the most popular Australian movie director in France (and probably in Australia, for the movies Mr Reliable, Amy, Matching Jack), Nadia Tass, was planning a few years ago to make a movie with Mary and I hope her project will come true…

But in the meanwhile and on the occasion of this very special day on Baudin Beach, dedicated to the European Settlement and particularly to Nicolas Baudin, on behalf of Les Amis de Nicolas Baudin, I would like to say a huge MERCI ! to all of you in Baudin Beach for pursuing the task of not letting go the name and memory of Nicolas Baudin and his expedition, and for keeping up the wonderful spirit we find any time we set foot on the island. In Baudin’s time the treasure of the island was the wildlife and the water that could make possible a human settlement. Today the people living in KI are part of this treasure and they have a huge work to do: taking care of a rich wildlife and keeping the place open to whoever has the heart to discover its treasures and preserve them.

With all the best wishes to the Baudin Beach community, 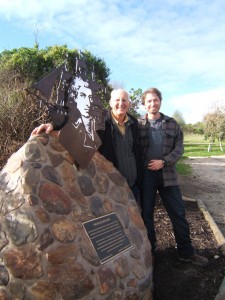 On Sunday July 15, in celebration of the 175th anniversary of the nominal European Settlement in SA, a group of about 30 people gathered for the unveiling of the Nicolas Baudin Commemorative Sculpture at Baudin Beach, and greatly appreciated the fact that, although it was a mid-winter’s day and very chilly, the sun shone throughout the event.

The sculpture, and the cairn on which it stands, were created by local artist Dave Clarke and reflect the same high quality as other works by Clarke which can be seen across the Island. Baudin Beach Progress Association thanked him most sincerely for the magnificent job he had done.

Baudin Beach Progress Association president Des Lanthois made a brief introductory speech, welcoming those who had turned up for the unveiling, and giving a brief overview of the historical significance of the event.

Mr Lanthois introduced Dr Gabriel Bittar, of American River, who read out a letter from Martine Marin, president of Les Amis de Nicolas Baudin in Paris. Her letter outlined our historical connection with Nicolas Baudin and thanked all in Baudin Beach for pursuing the task of not letting go of the name and memory of Nicolas Baudin and his expedition.

“In Baudin’s time the treasure of the island was the wildlife and the water that could make possible a human settlement. Today the people living on KI are part of this treasure and they have a huge work to do taking care of a rich wildlife and keeping the place open to whoever has the heart to discover its treasures and preserve them,” Ms Marin wrote.

Deputy Mayor Peter Clements said a few words of congratulation to the association, then unveiled the sculpture to a round of enthusiastic applause, and a chorus of admiration from those in attendance.

Dave Clarke was praised for his work, photos were taken, then everyone enjoyed hot soup, delicious nibbles and a good chat in the shelter shed, where, even if the weather was wintry, the atmosphere was delightfully warm and friendly.